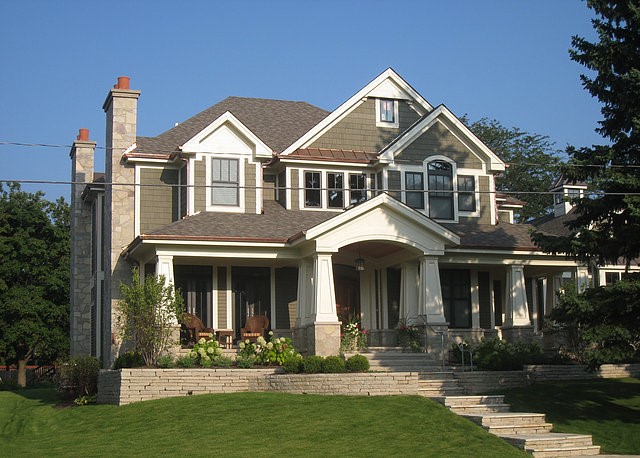 The American Craftsman style has its roots in the early 20th century. Charles Sumner Greene (1868 –1957) and Henry Mather Greene (1870 – 1954) popularized the style which was especially prominent in California. The style is characterized by its low-pitched gabled roofs with broad eaves, large front porches, and exposed wooden structural elements. The Greene brothers worked together from 1893 – 1914 and began making this particular style of home around 1903. One of the most famous examples of their work in the American Craftsman style is the Gamble House located in Pasadena, California. The house was designated as a National Historic Landmark in 1977. The Greene brothers did not stop there, however. Other examples of their American Craftsman work can be found in the Robert R. Blacker House and the William R. Thorsen House. The Robert Blacker House is located in Pasadena as well, and cost $100,000 at the time of construction (over $2.5 million today). The William Thorsen House is located in Berkley, California and, according to the Director of the Gamble House, Edward Bosley, the Thorsen House is “an elegant temple of high art-craft.” The American Craftsman architectural style has been popular for along time and it is no secret why!

This website uses cookies to improve your experience while you navigate through the website. Out of these cookies, the cookies that are categorized as necessary are stored on your browser as they are essential for the working of basic functionalities of the website. We also use third-party cookies that help us analyze and understand how you use this website. These cookies will be stored in your browser only with your consent. You also have the option to opt-out of these cookies. But opting out of some of these cookies may have an effect on your browsing experience.
Necessary Always Enabled
Necessary cookies are absolutely essential for the website to function properly. This category only includes cookies that ensures basic functionalities and security features of the website. These cookies do not store any personal information.
Non-necessary
Any cookies that may not be particularly necessary for the website to function and is used specifically to collect user personal data via analytics, ads, other embedded contents are termed as non-necessary cookies. It is mandatory to procure user consent prior to running these cookies on your website.
SAVE & ACCEPT